ITU Telecom World 2006 was held in Hong Kong this week, I have a chance of getting in from work, so how about a review for Palms? Don’t think Palm have a booth in the ITU, but ACCESS do! Start from ACCESS 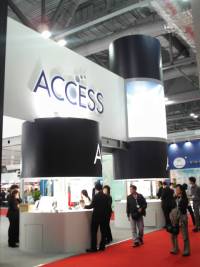 Click to enlarge First in the booth, I spotted the Netfront poster, do you know that the broswer we face EVERYDAY call Blazer is actually powered by NetFront, ACCESS! The Treooooos Click to enlarge I think ACCESS should spend just a little bit more time on the Treos, the name tag of the 700p and 680 was incorrectly place (the other way round…) Treo680 Click to enlarge The Treo680 was more lighter then what I thought, I think it is due to the reduced size of the battery….. and a little bit slim in width too. Treo700p Click to enlarge As Treo700p never released in HK due to different bands used, this is the very first time I have it on my hand! Click to enlarge Chatted with a manager in PalmSource (thanks Mr D!), he was very kind to show me the ALP prototype, a demo was shown running GoogleMap for Treo on the ALP prototype, it ran without any error, I was told that in the Linux conference last year prototype was shown and trial with many PalmOS application and they work without any problem. I was introduced in details about the ACCESS Linux Platform, like how it is going to run GTK App, MAX Linux Apps, Java Apps and of coz the Palm OS Apps in the ALP. Then I asked the very question EVERY Palm lover would ask, “When do we expect to see a REAL product?” I got an answer that we are looking for Q1 ~ Q2 of 2007 for a real product! (I hope this is the truth! we was waiting since end of 2002!!!) The main board of the developing ALP prototype, Internet was connected var the top-right hand ethernet port, and notice the CF slot A demo of the media player was shown. I obtain a very interesting poster from ACCESS booth called ACCESS Powered Devices, I may post it if there is any interest, it listed many Palm devices! The other Treo Click to enlarge Finishing the ACCESS booth, then I headed to the Microsoft booth for the Treo750v! (It was also shown in some other booth I think, like SmartoneVodafone) Not Treo! It is GSL! Click to enlarge The GSL m70 is not vapourware! I got confirm by staff it is on sale for HK$1980 (~192EU) in shops now! (Hong Kong) I am very impress with the m70, IMHO the g18/g88 from GSL (OS4) was not very good (in stablility, build-quality, customer support, buildin apps), but I think GSL is getting better and better! I think if you like a smartphone which act like more a phone than a PDA, GSL does worth a try! Where are they?