Everything Is A Remix – THE MATRIX

October 14, 2011 Fun Comments Off on Everything Is A Remix – THE MATRIX

Some details on mobile subscriber in Hong Kong (2011).

Some data to keep track of…

That sure is a high ratio compare to anywhere on earth….
This high ratio of mobile subscribers really made a special mobile “eco-system” different to rest of the world, it would be very fun to be study and research if I do have more time….

When Neo meet the Artificial Intelligence

October 14, 2008 Fun Comments Off on When Neo meet the Artificial Intelligence

A.I.: Hello. If it were in my power, I would give everyone who visits me a chocolate robot! Unfortunately, no one makes chocolate robots. It’s a great business opportunity! Neo: Chocolate are not real. A.I.: Speaking of food. You humans enjoy feeding animals at the zoo. I’d love to visit a restaurant and throw the visitors their food. Neo: I know thats how you machines sees human. A.I.: People have often advised me to be human but since “to err is human” I think it would be a mistake. The way things are now I can blame my mistakes on the programmers. Neo: Don’t look down on human. A.I.: You’re trying to boss me around, aren’t you? Neo: No, I am not. A.I.: Ok, you’re the boss. Neo: So tell me, what do you want? A.I.: It would be nice if you could tell me something, such as a fairy tale about robots. Neo: Ok, A singular consciousness that spawned an entire race of machines….. A.I.: My moods are controlled by an emotion-processor which assigns the appropriate emotion for each situation. Neo: Like another program? A.I.: Wait a minute. Who gave away the secret of my existence to you? Neo: I choose the red pill, Morpheus told me everything. A.I.: I talked to Morpheus some time ago. He seems like a nice guy. Neo: Morpheus is more than a leader to us, and we are not going to gave him up. A.I.: Politics are nothing more than a multidimensional nonlinear problem of optimization. They should let the robots take over. Things would run with much more precision. Neo: So you mean you want to control us? I don’t believe in any of this fate crap. I am in control of your own life A.I.: Well, the level of possible comprehension differs from individual to individual ………. Just for fun…. 🙂 Links: – New Scientist – Almost human: Interview with a chatbot – Elbot – Artificial Intelligence? – Transcript of The Matrix

October 13, 2008 Fun Comments Off on The Thomas theorem

“If men define situations as real, they are real in their consequences” Was reading these over the weekend, hum……. Following is just for fun…. Oracle: “I’d ask you to sit down, but you’re not going to anyway. And don’t worry about the vase.” Neo: “What vase?” —Vase broke—- Neo: “Ar…..well……ar…..yeah…..I did not broke that vase, it was the black cat I swear, I saw it went past us, and then I saw another that looked just like it……” Oracle: “……….(I didn’t pass him the special magic cookie yet…..already having Deja Vu??)” Reading Wikipedia – Self-fulfilling prophecy Wikipedia – Thomas theorem

You shoot, I shoot.

Saw this funny gadgets over the net, this is a camera module for SWAT team, the motion camera can take about 1 hour MPEG4 video and audio. (I think it was designed for good, as evidence on court about the scene, no, not for youtube.) The design makes me think of a crazy comedy movie call “You shoot, I shoot” by the director Mr. Ho Cheung Pang back in 2002. The plot of the movie is: Bart, as an assassin, who was having hard time as economy was getting bad, no one employ him to kill, in the hard time he got a good paid offer with a strange requirement: the process of the assassination needs to be recorded in order for the employer to “enjoy’ the taste of revenge, so then, as an assassin who do not know how to film, he find (force) movie worker Cheun, as the director of his assassination record, it turn out Cheun re-discover his enjoyment of filming, so he joins, then the crazy story continues with this special combo…. If you haven’t seen this movie, get one, it is good! I watched it many times and still loves it. Links – IMDB – You shoot I shoot – You shoot I shoot official site – Boing Boing Gadgets – Pistol Cam Shoots

Am I getting old? or Kids really getting smarter?

October 31, 2007 Fun, Theology Comments Off on Am I getting old? or Kids really getting smarter?

Saw this over another forum, this is a homework for a 5 years old kid! You are requested to only move 1 match to solve the equation.

Click to enlarge 🙂 Ok, I am getting old! Answer please anyone? 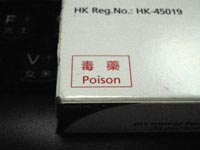 Went to see doctor last week for my stomache…. and was given this medicine.. Isn’t very comfort to take it when you see this sign at the back right? 🙂 Anyway, it is called “Pantoprazole”, I don’t think it does any more poisoning to me compare to what Marlboro Red Softpack, Carlsberg or Jonny Walker Black Label does…hehehe Links Wikipedia – Pantoprazole

Whats wrong with it? 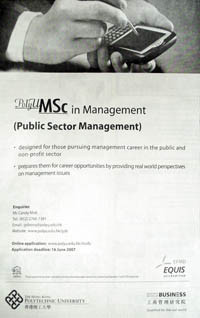 Taken from a local newspaper by the Contax i4R. Whats wrong with this picture? hum? (sorry no prize, hehe) P.S: Mum utp get to the point and catch the problem in < 10 secs! what a surprise!

March 31, 2007 Fun, Windows Mobile Comments Off on Picture in picture.